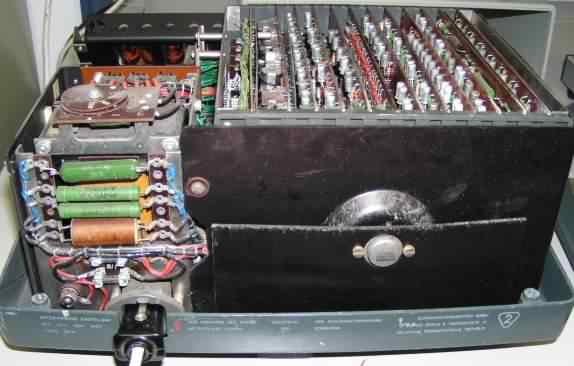 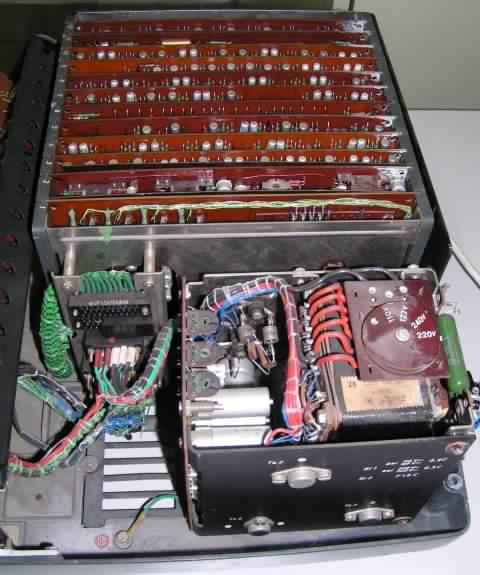 Soemtron ETR220
(Click an image for a larger version)

Our fourth Soemtron ETR220 which we have just received as a donation (September 2015) from John in Reading, is again an early Mk1 version with a serial number of 19058 and production date codes for late 1967 and early 1968.  A book of example exercises for the 220 produced by Office and Electronic Machines Ltd. (OEM Ltd.)[1] in London was also donated.  It is one of the very early variant Soemtron ETR220 machines where the electronics card cage is "reversed" to the later MK2 model production machines, that is - board 1, the memory core store is at the right hand end (centre) of the machine.  The power supply regulator transistor is not located in is usual position on the chassis base, but is mounted internally on a large "L" shaped anodised aluminium panel to the rear of the main electronics card cage.

It is believed that there were possible production or operational problems with this internal layout as the memory for the Soemtron ETR220 series which is a magnetic core store is susceptible to magnetic fields.  In this configuration it is very close to the transformer, possibly giving rise to stability problems from stray magnetic fields, or from temperature drift of the core store exacerbated by the internal heat sink for the power supply.  Long term stability of the machine is dependent on the core store and its voltage supply settings which are automatically compensated against temperature to try and lessen any of the temperature susceptibility that magnetic core stores suffer from.

John relates that the machine was bought around 1968 - 1969 from Office and Electronic Machines Ltd. (OEM Ltd.) in London UK, who were the importers of the Soemtron calculators from the D.D.R.  He apparently paid £400 (list) and had a further 10% discount on the deal.  In 1967 the Soemtron ETR220 was priced at £485.0.0d (about £7,200 in 2015 values!).  The machine does not have the usual silk screened exporters text on the rear of the base panel but does have an "Arrow" company label with a telephone number.  Currently the unit is non-functional - the display does not light up on resetting the machine and the number 3 key is not operating at all, so the machine would probably not calculate or accept keyboard entries anyway.  John did say the unit has not been used for some 30 years but that a few (about 8) of the display digits worked a few days ago when he got it out of storage.  Investigating the power supply is probably the first order of business, after a good clean as internally the machine has a heavy layer of dust with heat marks on the lid showing a lot of use.  The electronics card cage has very few witness marks from extracting the boards, so it would seem not to have needed much repair in the past.

Further technical breakdown of this particular machine will follow in the future.